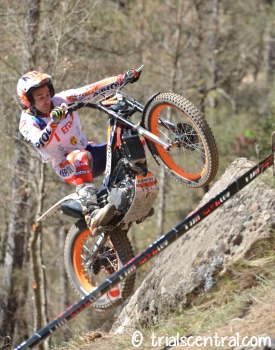 The second round of the 2016 FIM Trial World Championship takes place this weekend in Japan where the Honda-owned Twin-Ring Motegi circuit stages the event for the seventeenth consecutive year. With Japan being the only flyaway round of the series this year the majority of the European-based riders in all three classes are set to make the journey in order to try to score as many points as possible.

Toni Bou – Repsol Honda already holds a five-point championship lead over Adam Raga – TRS, following a win and a second place in the opening Spanish encounter at Cal Rosal despite having competed while suffering with a shoulder injury sustained in a training crash. Bou is chasing a tenth consecutive TrialGP crown and with a total of thirteen victories in Japan already the Barcelona ace clearly starts as favourite this weekend. Albert Cabestany –Sherco, sits in third place in the current standings after taking the win on the opening day of the season in Spain just three points the better of Jaime Busto – Repsol Honda following his two fourth spots at the first round.

Currently seventh in the points table, Takahisa Fujinami – Repsol Honda will compete in his three hundredth Trial Grand Prix this weekend whilst Jeroni Fajardo – Vertigo will reach his own personal Trial Grand Prix milestone of two hundred starts. Fajardo presently sits in sixth place in the series just one point behind his Vertigo factory team-mate James Dabill, the latter fresh from a strong double victory in the opening rounds of the British Championship.

Fujinami, in his twenty second TrialGP season, is the only Japanese rider contesting the complete 2016 series, but as ever the Japanese Trial GP has attracted a host of home riders. The TrialGP class sees ten wild-card entrants boost the class numbers to twenty-eight including former FIM Trial World Championship contenders Kenichi Kuroyama – Yamaha and Fumitaka Nozaki –Scorpa plus the talented and experienced Tomuyuki Ogawa – Honda HRC.

The Trial2 class is led by Britain’s Iwan Roberts – Beta, by just two points from Spanish challenger Arnau Farre – Gas Gas after both riders took a win each in Spain with Jack Price – Gas Gas waiting to pounce just four further points in arrears. The six Japanese challengers in this class are sure to add an extra dimension to this already intriguing division and may just cause an upset too.

Clear leader and hot British prospect Jack Peace – Gas Gas, who is sitting on a maximum forty-point score after Spain, heads to Motegi looking to do the double once again in the Trial125 class. However, this time out he will face opposition from relatively unknown home riders, plus his more usual European rivals.

Typically all is in place for yet another epic edition of what is widely regarded as the best Trial GP in the calendar year on year.