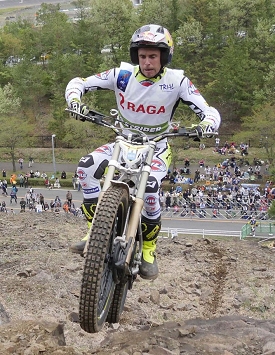 Adam Raga – TRS became the third different rider to take to the top step of the podium in the 2016 FIM Trial World Championship as he scored an emphatic victory on the opening day of the Japanese Grand Prix at Motegi. Raga was in control from early on the first lap and edged further clear of his rivals to give TRS their first ever win in the series with a winning margin of sixteen marks over runner up Toni Bou – Repsol Honda. Although unable to fight for the victory Bou was quite happy with second spot as he remains hampered by the injury to his right shoulder. On the eve of his three hundredth GP start Takahisa Fujinami – Repsol Honda made a much welcomed return to the podium in front of his many home fans, this was the first time the popular Japanese rider has featured in the top three since the French GP last season.

Fujinami took great delight in keeping his much younger team mate Jaime Busto – Repsol Honda off the box by just a single mark after a day long battle between this four stroke powered pairing. Whilst fifth spot was not the result Albert Cabestany – Sherco was looking for, he can at least count himself fortunate in coming off the best in a four-way scrap where four riders were separated by a mere four marks. Such that Matteo Grattarola – Gas Gas was demoted from the top five by one mark as he ended up in sixth place. Jeroni Fajardo – Vertigo celebrated his two hundredth GP start in seventh spot as he defeated his team mate James Dabill – Vertigo on a most cleans tie-break. With Dabill occupying eighth position, the Japanese duo of Tomoyuki Ogawa – Honda and Kenichi Kuroyam – Yamaha closed out today’s top ten in the TrialGP class.

During the post event press conference Raga stated. “This is a historic moment for TRS, as a team we have been working hard for this moment and today it has all come together and we have achieved this great result. It has been a tough, but good Trial today. My riding was good and I only made a few mistakes which must be expected when the level of the sections is so high. It’s a great goal to reach, but now we need to prepare again and try to repeat the victory tomorrow.”

Bou remains at the head of the general standings, but only two points ahead of Raga going into tomorrow’s competition.

As was expected the Trial2 class was as hotly contested as ever with Jack Price – Gas Gas taking the win today, his first of the season which also moves him to the top of the overall standings by a single point. France’s Benoit Bincaz – Scorpa pushed the British rider hard all day, but had to be content with second spot come the finish which was a marked improvement on his two performances at the first round in Spain. Arnau Farre – Gas Gas remains a title contender as he took third position this time out. A winner on the second day of the Spanish GP, Iwan Roberts – Beta was unable to challenge for the victory on this occasion as he came home in fourth place just a single mark ahead of compatriot Dan Peace – Gas Gas who rounded out the top five on day one.

Jack Peace – Gas Gas continued his victorious form in the Trial125 class as he notched up his third win on the bounce with him again destroying his rivals. Peace finished a massive thirty-two marks the better of eventual runner up Max Faude – Beta from Germany. Fifteen-year-old Japanese rider Shota Yamazaki – Beta enjoyed an incredible home GP debut as he completed today’s podium to push the European pairing of Christopher Wengler – Ossa and Mikkel Brade – Beta down to fourth and fifth places respectively.

The second and final day of the Japanese Trial Grand Prix will take place tomorrow, with modifications expected to be made to selected sections subject to weather conditions overnight.

Owing to prior commitments and preparation of the website for a little Trial in Scotland starting next weekend, Trials Central are not in Japan this weekend. Images provided by FIM