Toni Bou Back On Top On Day 2 In Japan 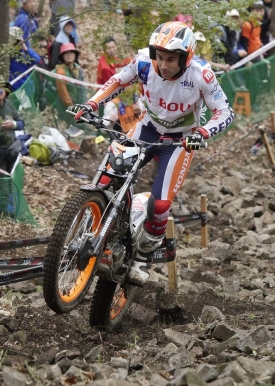 Toni Bou – Repsol Honda returned to the top of the podium as he clinched the win on the second day of the Japanese Grand Prix in Motegi, which brought to a close round two of the 2016 FIM Trial World Championship. Where Bou had struggled with his injured shoulder just twenty-four hours earlier, today he was simply supreme and was never headed on the three laps of twelve mainly modified sections. Rain overnight forced the organises to reduce the severity of ten of the hazards, which then naturally became easier as the sun dried the sodden ground throughout the day.

Saturday’s winner Adam Raga – TRS, this time out had no answer to Bou and ended the day as runner-up and twelve marks behind the reigning champion. Fittingly and much to the delight of the thousands of home fans Takahisa Fujinami – Repsol Honda again completed the podium on this the occasion of his three hundredth Grand Prix appearance. Albert Cabestany – Sherco enjoyed a slightly better outing as he placed fourth on day two, one place higher than Saturday. It was a similar story for Jeroni Fajardo – Vertigo who moved two positions up the order from yesterday to take fifth spot.

Jamie Busto – Repsol Honda excited the crowd at moments, but only had sixth place to show for this extrovert efforts come the finish. The final spots inside the top ten went to Matteo Grattarola – Gas Gas, James Dabill – Vertigo, Tomoyuki Ogawa – Honda and Pol Tarres – TRS respectively, as once again only a few marks split fifth through to tenth place. Bou now heads the general standing by five points from Raga, with Cabestany holding station in third position overall.

A jubilant Bou said. “Again like Spain I didn’t expect to be able to fight for the win after yesterday, but for some reason that I cannot explain at the moment my shoulder is better on the second day of competition. Generally, I am very tired as I have not been able to train for over two weeks not, so my physical condition is not at its best. My situation was helped today because of the easier sections, as when they are more difficult I am not able to ride at a higher level at the moment. To win here in Japan is great for me, but also great for the whole Repsol Honda team.”

Dan Peace – Gas Gas became the fourth different winner of the Trial2 class as he took his maiden victory, to match the performance of his younger brother in the Trial125 class, and to lead home an all British podium in his own division. Peace led from start to finish and had to withstand great pressure as runner-up Iwan Roberts – Beta finished just two marks behind his compatriot. In a much lower scoring competition compared to Saturday, yesterday’s victor Jack Price – Gas Gas ended the day on just twelve marks, but down in third spot on this occasion. Arnau Farre – Gas Gas tied on the same marks as Price, but lost out on the tie-break in fourth position, whilst Luca Petrella – TRS rounded out the top five, as five marks covered first to fifth places today. Roberts returns to the head of the overall standings one point the better of Price with Arnau in third a further three points adrift.

After the initial two rounds having come in quick succession, the 2016 FIM Trial World Championship will now pause briefly before it resumes again in Germany come late May.