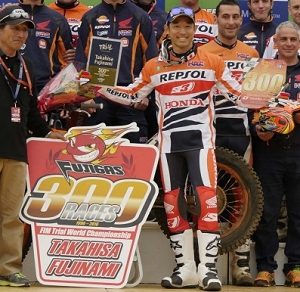 A win for Toni Bou in Motegi on the second day of the Japanese GP where the Repsol Honda Team rider took control early and dominated throughout the day. Team-mate Takahisa Fujinami, once again, finished on the podium on a day when he took his world championship trial tally to 300.

An overwhelming triumph for Toni Bou in the Japanese Grand Prix. The Repsol Honda Team champion shone on the second day in a performance, which in many ways, mirrored his success here last season.

Rain during the night forced race authorities to modify some of the sections making them more manageable. For this reason Toni Bou, feeling in better physical shape, was able to overcome any setbacks and weather the competition in his own inimitable style. By halfway point on the first lap Bou had already taken control, holding the first position which he then maintained throughout the rest of the three laps of the twelve section course, improving each time around. This is the second win this year for the Repsol Honda Team star who now has a five-point advantage over nearest rival Adam Raga in the general rankings.

Takahisa Fujinami celebrated a 300th world trial championship appearance with another podium finish. In a determined effort and one that differed from previous performances, the Japanese rider rode a precise and focused trial that saw him narrowly miss out on the second step of the rostrum. The Motegi circuit is something of a talisman for ‘Fujigas’: the Repsol Honda Team rider has obtained a total of 26 podium finishes there. Over the course of the 300 world championship trials, the veteran has accumulated 4103 points, with 295 finishes within the top 15 finishers and a total of 155 podiums (32 wins, 55 second places and 68 third places).

Basque rider Jaime Busto comes away from the trial unsatisfied after having hoped to make it onto the podium in Motegi. However, in spite of a brief spell where he notched up a lot of marks including four faults in four sections, the young rider has otherwise performed at the same high level as trial’s top guns.

The next trial in the FIM Trial World Championship will take place in Germany in a month’s time. On the 28th and 29th May, the town of Gefrees will play host to the third date of the season. The Repsol team will, however, first dispute the second round of the Spanish Championship in Sigüenza on May 15.