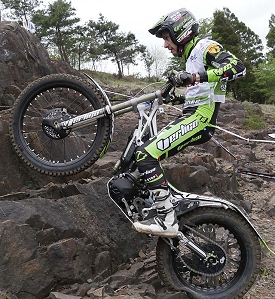 After a short pause the 2016 FIM Trial World Championship moved to Japan for the second round of the series, which was hosted for the seventeenth consecutive time at the magnificent Motegi Twin Ring circuit. Factory Vertigo riders Jeroni Fajardo and James Dabill again scored solid points towards their respective campaigns over the weekend, with Fajardo taking fifth spot on Sunday to sign off on a productive trip to the land of the rising sun.

The local organisers had worked hard to create a variety of new sections in the steep wooded areas that surrounded the imposing tarmac circuits. Whilst the sun shone brightly on day one the ground remained wet from the rain earlier in the week and made for difficult conditions as the mud dragged onto the rounded boulders. Despite the smooth power delivery of the fuel injected two stroke engine, which sits at the heart of the revolutionary Combat model, both Dabill and Fajardo struggled to find their best form during Saturday's competition.

It was Jeroni who produced the more consistent performance with three similar lap scores, whilst in slight contrast Dabill did not enjoy the best of opening laps, but improved lap on lap to record the third lowest lap score on his final tour. Both Vertigo factory riders can count themselves a touch unlucky as a mere four marks separated positions fifth to eighth come the close of play on day one. Tied on the same marks, and just four marks away from a top five placing Fajardo beat Dabill on a most cleans tie-break as the pairing ended Saturday in seventh and eighth places respectively.

Rain overnight then forced the local organisers to modify ten out of the twelve sections ahead of Sunday's trial. These changes, to reduce the severity, and the effect of the sun drying the wet terrain out over the course of the day brought a much easier competition on day two. In almost a mirror performance of twenty-four hours earlier Fajardo again delivered three consistent laps to seal a solid fifth spot to round out his weekend. Dabill's day was much different with him incurring heavy losses on lap one before he then produced two much improved laps to pull himself up the order and into eighth spot for the second day running.

Commenting on the Japanese GP Fajardo said. "It has been another tough weekend, with some strange and changing conditions in the sections due to the weather. Fifth place on Sunday was at least an improvement from the previous day, and although we are not where we want to be at the moment it feels like we are moving in the right direction."

Reflecting on his own weekend Dabill stated. "After a great result in Spain and two more good results in the British championship last weekend I came here with a good level of confidence. Apart from the leading few riders the scores have been very close on both days, so my results could have easily been much better than they actually were. Each day I got better as the day wore on so I can take something positive from that before I head back to ride the SSDT.â€

With now one month until round three of the 2016 FIM Trial World Championship in Germany, the Vertigo team will now focus its attentions on the World famous Scottish Six Days Trial (SSDT) that will begin in Fort William, Scotland on Monday 2nd May. Dougie Lampkin will again lead the Vertigo attack as the defending and already nine times SSDT champion looks to repeat the debut success he gave the then prototype Combat twelve months ago.