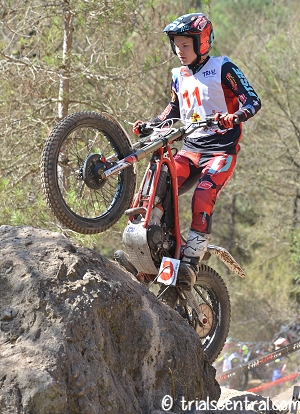 Young German competitor, Franz Kadlec will enjoy his first home event this weekendThe third round of the 2016 FIM Trial World Championship sees a return to Germany this weekend after a break of five weeks. The last time the series was on German soil being 2011 when Toni Bou –Repsol Honda took victory in the single day event at Gefrees, the same venue that will also host this year’s Trial GP.

Germany has been a consistent supporter of the series, having staged a total of twenty-six Trial Grand Prix events to date including the very first year of the FIM Trial World Championship in 1975 at Kiefersfelden. Gefrees was first visited the following year in 1976 and 2016 will mark the tenth time the World campaign has included this venue.

It is a fact that Germany was one of the countries instrumental in bringing the FIM Trial World Championship into being, having supported the proceeding European Championship through each of its seven years and before that was involved in the International Henry Groutars series.

Seven times former FIM Trial World Champion Jordi Tarres has scored the most victories in Germany having won a total of six Trial GPs hosted in this central European country. Next most successful is fellow seven times title winner Dougie Lampkin with five wins while third on the all-time list is Dougie’s late father Martin, the first ever FIM Trial World Champion back in 1975 and who recently sadly passed away. Martin was victorious in Germany on four occasions.

Recent years has only seen Germany stage the event once since the two-day event at Gefrees back in 2005, on that occasion Adam Raga won both days on route to claiming the first of his two outdoor World crowns. Hence having been absent from the calendar in more recent years, reigning and nine times FIM Trial World Champion Bou only has his single German GP win to his name – in 2011 – to date, but will be looking to add to his total this weekend.

Home stars Gustav Franke (1966) and Andreas Brandl (1967) both topped the podium when it was the Henry Groutars Challenge, but no German rider has been victorious since then.

This weekend though will see Germany’s best young rider for many years, eighteen-year old Franz Kadlec – Gas Gas get his first opportunity to perform in front of his home fans. The winner of 2013 125 Trial World Cup and 2014 European Champion finished 2015, his inaugural season in the FIM Trial World Championship eleventh place overall.

After the opening two rounds of the current campaign, in Spain and Japan, Franz who will only turn nineteen years old in July, currently sits inside the top ten, occupying a useful ninth place and looking forward to scoring some heavy points riding his home Grand Prix this coming weekend.