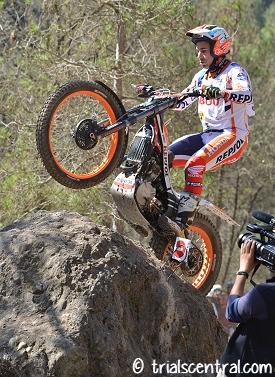 Toni Bou - Repsol Honda currently holds a slender five-point lead over Adam Raga –TRS in the battle for the 2016 FIM Trial World Championship, but he will be looking to extend that advantage this weekend at the third round of the series to be hosted in Gefrees, Germany as Toni seeks an unprecedented tenth outdoor title to perfectly match his ten indoor crowns.

Bou was victorious last time the series visited Gefrees, when he won the single day round in 2011, although the time before that Raga scored a winning double to seal his first World crown in 2005. Whilst Bou and Raga are expected to battle it out once again in the two-day event there will be plenty of opposition, headed by Sherco’s Albert Cabestany who won the opening round of the current campaign in Spain.

The Repsol-Honda duo, veteran Takahisa Fujinami and teenage Spanish prospect Jaime Busto are sure to both be right on Cabestany’s case, whilst the Vertigo factory pairing of Jeroni Fajardo and James Dabill have the added incentive of beating each other as well as looking for podium placings, with Dabill having already achieved a third place in Spain.

Home nation rider Franz Kadlec has every chance of scoring good places, the World number eleven having landed a factory Gas Gas ride in the close season and after the opening rounds in Spain and Japan holds a promising ninth place overall. This is the first time that eighteen-year-old Kadlec has been able to compete at the top level in his home country and the winner of the 2013 125 Trial World Cup is keen to show he is a very real future championship prospect.

In the Trial125 class Britain’s Jack Peace – Gas Gas, Dan’s younger brother, seeks to extend his 100% winning record, four starts and four wins. However the host German nation will be rooting for their own Max Faude - Beta to step up to the plate and take a class win off the back of his four runner-up berths to date. Home rider Jarmo Robrahn – Beta could also provide an upset in this class as the championship makes a welcome return to German soil.