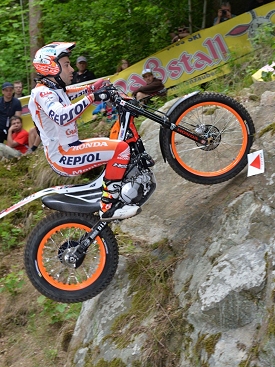 Repsol Honda Team rider, Toni Bou has clinched an important victory in the third round of the FIM Trial World Championship held in Gefrees, Germany.

Toni Bou increased the gap further at the head of the general rankings with a tightly-fought battle in Gefrees. There was virtually nothing separating Bou and arch-rival Adam Raga until the very last section of the trial, in spite of the champion having sneaked into the lead at section four of the third and final lap. Toni managed to cling on to the mere two-point advantage as the race went to the wire.

The twelve-section, three-lap trial in Gefrees, proved to be a tricky event thanks to a week of rain in the run-up to the race. It was still raining over the first few hours of the day as the riders headed out. With the sections all wet, there was little traction and competitors were forced to put in more physical work to get over the obstacles.

If the conditions were unfavourable for the riders, Toni Bou had it worse; the Repsol Honda Team rider is still trying to shake off an injured right shoulder tendon. Bou laboured his way through the opening sections before being forced to remove the strapping securing the injury to free up movements. A sudden move in the second section brought back the sharp pain. After consecutive faults in sections two and three, the Spaniard was forced to put the strapping back on. The relief was immediate and soon it was back to business as usual as Bou clawed back the dropped points. The first day of the German GP ended with Toni having accumulated twenty points and now lies eight points clear at the top of the leaderboard.

Bou’s Repsol Honda Team companion Takahisa Fujinami missed out on a podium place after a hard blow in the leg left him struggling to find the strength and resulted in a string of errors. By the final lap, ‘Fujigas’ had recuperated and was able to defend the thirteen points which led to a final fourth overall position.