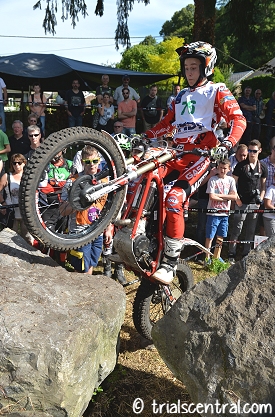 Cloburn JST GAS GAS UK rider JACK PEACE has won the 2016 World 125cc Youth Cup. Jack did it in style winning the day yesterday easily from his closet rival Max Faude. With four days of WTC competition still left to ride (WTC UK and WTC ITALY) Jack can relax knowing the title is already his. He will ride in his home GP this weekend on his Championship winning TXT125 RACING and will try and give the UK public a double win to celebrate.

Jack has come of age this year and I have to congratulate him and his immediate family. Yes he is on a GASGAS and GGUK and the GG Factory have indeed helped but I really want to take this opportunity to thank mainly The Peace Family because they have worked a long time for this special moment for Jack. To win this Trial125 Cup, it is almost all funded by the family and they are not on their own. All the riders in this class and actually the Trial2 class are funded by passionate families that deserve all the praise. A lot of sacrifices are made, a lot of miles are driven and a lot of euros are spent.

I personally know all the countless hours of training that Team Peace has spent and it has now paid off. Jack Peace is special and the main attraction to Jack is the fact he is the most humble and ‘nice’ lad I know. He won yesterday and yes I had tears of a few emotions, happiness and relief. I like grafters and I like winners and we have a very special rider in Jack Peace and I personally hope I can help him to more titles. Winning matters and keeps me motivated 100%. So well done mate and enjoy this moment. Don’t enjoy too much though because you’ll be on a big bike soon and things will get serious. Jack could ride the final WTC round in Italy in September in the Trial2 Class.

Another rider with nearly one hand on the World Trial2 Cup is also a grafter and also from a family that gives 100%. Road and Trials GG rider JACK PRICE easily won yesterday and extended his lead in the Trial2 Class. A class performance from Jack and his team, very confident and demoralizing for his rivals. Jack would love to clinch his title this weekend at Tong in front of his home fans. Get there and get behind this local Yorkshire star!

Coburn JSTGGUK rider Dan Peace let his younger brother have the glory yesterday and had a bad day with no excuses. Dan finished 11th and just couldn’t get flowing. Dan was deflated at the finish but naturally chuffed for Jack and is determined to get on the UK podium this weekend at Tong. Dan is 4th in the Championship but needs some good results to stay there.

JST GGUKM rider Tom Minta enjoyed his WTC ride and finished 18th. I’m sure Tom will be in the points this weekend.

So with all things going well for GASGAS in the Trial2 and Youth Class I'm afraid the same can not be said for the main GP Class. The main two riders Matteo Grattaola and Franzi Kadlec failed to perform and need to up their game in the UK and ITALY. They are now 9th and 10th in the Championship respectively.

Too many people to thank here but a big thanks to Team Peace, GG Factory and the FG Factory GG team for making this happen.