Can Bou Be Beaten In Blighty? 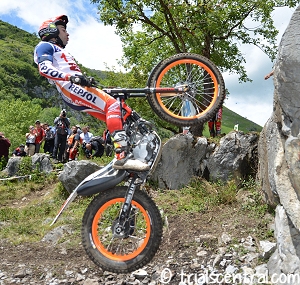 This weekend sees the penultimate event of the eight round 2016 FIM Trial World Championship staged at Tong, Great Britain. It is twenty-three years since the series was last staged in the county of Yorkshire, billed as the ‘home’ of motorcycle Trial, and a traditional style of event is promised, the sections having been designed by former Trial GP winner and current hard enduro star Graham Jarvis.

Toni Bou – Repsol Honda won his eighth Trial GP of the season at the single day Belgian round last Sunday and eased his championship lead out to twenty-three points over arch-rival Adam Raga –TRS. Toni is chasing a record busting tenth consecutive outdoor title. Raga has won just one day’s competition this year and a double win would at least give him a chance of running Bou down in the final round in Italy. History is against him though as Bou has been unbeaten at the British round since 2008 taking a total of eight victories.

British hopes lie with lone home round TrialGP contender James Dabill –Vertigo, who was born and raised close to the venue at Tong. Dabill has mounted the podium in a British round before and is capable of doing so again although he will have strong opposition from his Vertigo team mate Jeroni Fajardo, Repsol Honda duo Takahisa Fujinami and Jaime Busto and Sherco’s Albert Cabestany.

In Trial2, which is the largest class with a total of twenty-nine riders, it is odds-on that home round Yorkshireman Jack Price – Gas Gas will clinch the 2016 crown, with this class allowed to drop their worst two results in the overall title race. Jack is forty points clear of second placed Iwan Roberts – Beta who in turn is just six ahead of Spaniard Arnau Farre – Gas Gas. Fourth placed Dan Peace – Gas Gas and Gael Chatagno – Beta in fifth spot are currently locked together on one hundred and twenty-three points and are still in with a shout of a season-end podium finish.

The FIM Trial125 World Cup title was decided last Sunday at the Belgian round with Britain’s Jack Peace – Gas Gas now having the pleasure of riding two days in his home round having already captured the crown. An extra twelve British riders, all eager to gain experience at the highest level has boosted Trial125 class numbers to a healthy eighteen in total.

With plenty for the home fans to cheer about all is set for a typically strong British Trial GP this weekend coming.