Another Champion For Gas Gas Team 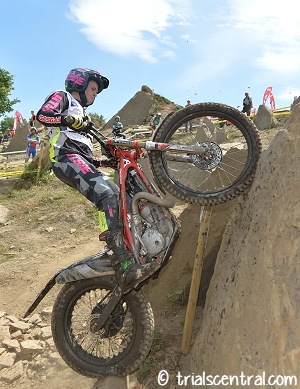 This was his great chance on home turf, in the British GP, and he certainly took advantage of it by the fastest route. Jack Price was the winner in Tong and was crowned the new Champion of the Trial2 Cup class after his seventh victory this year.

This has been a weekend of celebrations in the Gas Gas Factory FG Trial Team. After celebrating Jack Peace’s win in Trial125 last week, yet another title has been added just seven days later, this time thanks to the fantastic season’s riding from Jack Price. In Tong, with surprising maturity from such a young rider, the British Gas Gas rider set aside all the pressure to win the title. On Saturday, he got stuck in right from the start and handed in his scorecard with only 6 penalty points. This result meant that Jack Price was first time World Champion with an event still to go.

His teammate in the same category, Dan Peace, just one point from a podium finish on the first day, got his own back in his own way by getting a victory in Trial2 on Sunday. What a great way to finish off a weekend of celebrations for the Gas Gas Factory FG Trial Team, with their two riders, Dan Peace and Jack Price, at the top of the podium. The two British riders were, together with Jack Peace, who was once again a double winner in Trial125, the great stars of the show in the British GP with their World Championship results and in their own country.

There was not such a stellar performance from Arnau Farré in this the seventh and next to last GP in the World Championship. Eighth on Saturday after a first lap with three seconds which affected his final score despite his excellent last lap. The following day, the young hopeful from Gas Gas was only able to get a tenth place in a category with very close scores both in the upper and middle part of the table. Meanwhile Marc Riba, rider in the SPEA RFME team with support from Gas Gas in the World Championship, finished the British GP with tenth and fifteenth positions.

After his eighth and tenth places in Tong and with the World Championship with Jack Price as champion and master of Trial2, Arnau Farré keeps his third position on the table with 160 points, followed by his teammate, Dan Peace, in fourth place at only four points from the Catalan rider.

In Trial125, Jack Peace once again demonstrated exactly why he was proclaimed World Champion in the Belgian GP, so early on while two races were still to be held. The young British trial rider once again dominated the 125 class, where he achieved two new victories on home turf. Meanwhile the German rider Christophe Wengler, supported by Gas Gas in the World Championship, finished in eighth and thirteenth positions.

In Women’s Trial, Sandra Gómez got off to a great start. The rider from Madrid made her first appearance in the World Championship as a Gas Gas rider, winning a third place on the podium on Saturday and a fourth place on Sunday. These results were fairly satisfactory as a debut for Sandra Gómez in a World Championship, which the Gas Gas rider is making a great effort to prepare this season. A season which this year is certainly short for the women, with only three events, the next ones being the Italian and French GPs, after that just held in the UK.

It was a complicated weekend for the Gas Gas riders in TrialGP, again with extremely selective zones in the top category of the World Championship. The German rider Franzi Kadlec was the star rider of the team this time, with an eighth and a tenth position. He was followed by Matteo Grattarola, who in Tong only managed a twelfth place on Saturday and an eleventh position on Sunday. Meanwhile the Norwegian, Häkon Pedersen finished both days in sixteenth position. After the British GP, the Italian and the German hold ninth and tenth positions in TrailGP respectively.

Now that the seventh and next to last event in the Trial World Championship has been held, the World Championship is to take a break until the Italian GP held on 3rd and 4thSeptember in Valchiampo. It is here that the last men’s title is to be decided now that both the Trial125 and Trial2 titles are in the hands of Jack Peace and Jack Price, both riders with the Gas Gas Factory FG Trial Team.