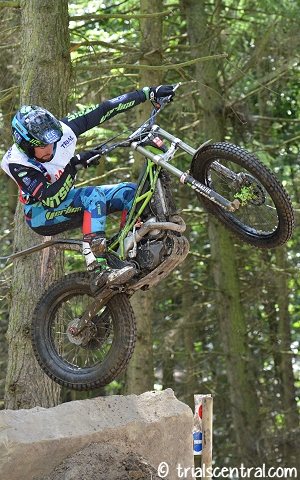 Great Britain welcomed the 2016 FIM Trial World Championship, as the new venue at Tong close to the city of Leeds hosted the penultimate round of the series in almost untypically British weather as the sun shone bright on both days of competition. The opening day of the event held in Yorkshire's heartland saw the Vertigo factory team create further history as James Dabill took second spot to record a career best result both for him and the relatively new manufacturer. There was even more good news on day two as Jeroni Fajardo came within a single mark of making it on to the podium despite still nursing a neck injury.

Having never staged a World event previously the compact venue at Tong had undergone much work before welcoming the series with man-made rock hazards mixed with some more traditional slippery sections being much the theme over the weekend. Rain in the days just prior to the Trial left conditions greasy initially, but the warm weather helped dry the ground as the riders tackled three laps of twelve sections each day, with four of these being modified on Sunday to increase the severity overall.

Riding in front of his home fans Dabill immediately showed his intent and the true potential of the fuel injected Combat as he traded early blows with Saturday's eventual winner Toni Bou for a share of the initial lead. Whilst James was to lose contact with Toni during the latter part of the first lap, he still managed to put himself in a clear second spot a position he would hold to the finish much to the delight of the large home fans that closely followed his progress through each and every section.

Dabill's runners-up placing was the best of his career and marked a new high for Vertigo too. James's team mate Jeroni Fajardo endured a different kind of day and he fought his own battle to do his best despite suffering the effects of the neck injury he sustained at the French GP. Just a few marks back from fourth place, Fajardo was rewarded for his efforts with sixth spot on day one.

Revisions to four sections for Sunday's competition served up a much tougher proposition on day two despite more warm and dry weather drying some of the hazards. This time it was the turn of Jeroni to shine as he put himself in contention for a podium placing thanks to a strong initial lap. Two more equally solid lap scores saw Fajardo cruelly miss out on a top three position by a single mark come the finish, an amazing feat considering his current physical condition. Unfortunately, there was no repeat of his previous day's result for Dabill as this time he struggled to find the same form and had to be content with seventh this time out.

Delighted with his second place, Dabill said. "It feels amazing to get this result not just for me, but for the whole Vertigo team, and it is even more special to have done it in front of my home fans. Again we have shown the true performance of the Combat at the highest level, it is just a shame I couldn't have done the same on day two."

Reflecting on his weekend Fajardo commented. "Again it has been a really tough couple of days. I am in a lot of pain with my neck and have felt quite dizzy at times on both days. Our goal is to be on the podium, but that has not been possible this weekend, but I am still quite pleased to have been so close to the top three on Sunday. With the long break, I will now have some time to recover properly."

Fajardo and Dabill remain sixth and seventh respectively in the general standings, whilst Vertigo continues to hold an impressive second spot in the manufacturers championship. The 2016 FIM Trial World Championship is now set to take its traditional summer break and will resume for the final round in Italy in early September.