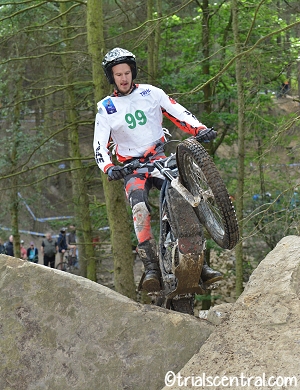 Saturday and Sunday 16th & 17th July will go down in history alongside DirtBike Action and Electric-Motion as the combination that delivered the World First FIM ‘e-Class’ Trial competition (For adults Electric Trials Motorcycles) as part of the World Trials Championship Event at Parkwood Off-road, nr. Bradford. With three riders competing, it was possible, for the first time to have a prodium presentation specifically for electric bikes.

The three riders completed the Electric Bike Class in an amazing show of power, control and talent, entertaining the thousands who visited the event on both days. FIM officials were delighted that the UK event was the first time that an ‘E-Class Trial’ could be held and gave great praise to the event organisers for hosting the class. The UK’s own Chris Pearson (Of Splatshop and British Championship Trials fame) took top honours on both days, followed by Bastien Hieyte (Electric-Motion factory rider) and Mathew Alpe (Inch Perfect Trials), Electric-Motion UK were delighted at the public response to the bikes both during the trial and through their joint display and try-out area run by Inch Perfect Trials with their UK Director Allan Seedhouse commenting “We had a perfect weekend, great weather, superb venue and a large and enthusiastic crowd. Our stand and Try-out Zone were inundated both days….3 bikes in the class this time let’s try for more than 10 entries next year…we’ll be back and we suspect the crowds will too."