2016 World Series Draws To A Close 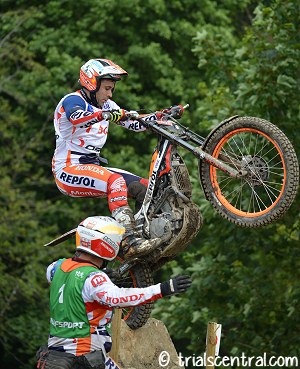 Since that inaugural 1975 season Italy has only missed out on staging a round four times, the years being 1977, 1985, 1998 and last year, meaning that 2016 will be the thirty eighth running of the Italian Trial GP.

Italy’s Trial Grand Prix has also been staged at a variety of venues, mainly in the mountains to the north east of the country with Foppolo, which can be found north east of Milan having staged the event on three occasions, which is the most numerous of all, it last being held there in 2010.

The most successful rider in Italian rounds is seven times FIM Trial World Champion, Britain’s Dougie Lampkin with nine victories although Bou could equal this as he currently boasts seven wins, the same as his legendary countryman Jordi Tarres, who also has seven outdoor crowns to his name.

Somewhat surprisingly, the competitor with the most podiums is the highly popular Japanese rider Takahisa Fujinami – Repsol Honda with a mighty twenty-two (including five wins), seven ahead of Lampkin while Bou is on eight – although that is qualified with seven wins and a single third place.

2016 will only be the seventh time that Italy has promoted a two-day round, the last one being at Valbondione back in 2005, something which helps explain Bou’s relative perceived lack of success in the country compared to the likes of Lampkin and Fujinami.

Considering the enthusiasm of the country to host the FIM Trial World Championship, Italy has only seen two home victories and the late Diego Bosis scored them in 1992 and 1994 at Camerino and Imer de Presolana respectively.

Toni Bou won the last Italian Trial GP staged at Alagna in 2014 and has only been defeated once in Italy since 2007 and that being by Raga at Barzia in 2009, Bou looks odds on favourite to wrap up his tenth successive outdoor title this weekend coming.