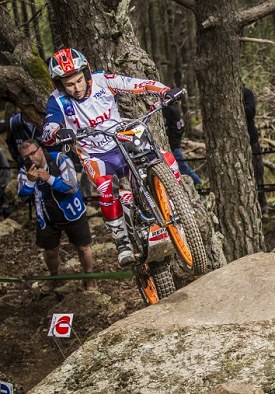 The 2016 FIM Trial World Championship wraps up this weekend in Italy with a crucial date for Toni Bou and the Repsol Honda Team. The Montesa Cota 4RT rider is on the verge of a championship win that will increase his status as the most-garlanded world champion.

Sitting on a 31 point advantage over nearest second place rival, Toni Bou looks set to clinch a tenth Outdoor Trial title this weekend in San Pietro Mussolino, Italy. This will bring the Spaniard’s total tally for Indoor and Outdoor to twenty, further consolidation of his now legendary standing as the most decorated champion in motorcycle history.

There is a very high chance that the Repsol Honda Team rider will scoop the title in the first of the two ‘match balls’ of the Italian GP. A seventh place would be enough to seal the title, although until now the Montesa Cota 4RT ace has never finished in such a low position.

Toni Bou’s teammate Takahisa Fujinami also has the chance of achieving a personal goal in the world championship as the Japanese rider battles for a third place overall spot. ‘Fujigas’ currently holds third place with a 14 point advantage over the nearest contender. Working against him is the injury picked up earlier this summer during the Indoor Trial in France. After undergoing surgery, the Japanese rider has barely had a week to train for the event. Fujigas hopes to be able to make it through what looks likely to be a complicated trial.

Repsol Honda Team would like to take the opportunity to express their support for the victims of the earthquake in the Lazio region, in particular in the towns of Amatrice and Accumoli.