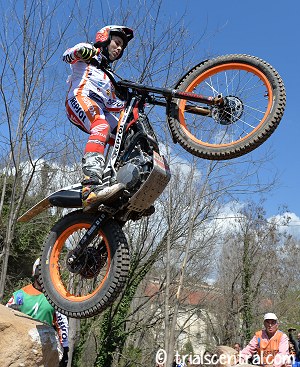 The 2016 FIM Trial World Championship comes to a climax this weekend when Italy hosts the eighth and final Trial GP of the season at San Pietro Mussolino, in the north east of the country in the province of Vicenza.

With the Trial2 and Trial125 winners having already been crowned, British riders Jack Price and Jack Peace taking the titles for Gas Gas, Italy will host the TrialGP finale with reigning nine times consecutive World Champion Toni Bou –Repsol Honda being the hot favourite to make it ten in a row, an unprecedented and almost unbelievable feat.

Toni goes into the two-day event thirty-one points clear of his closest rival, old foe Adam Raga –Gas Gas and nothing short of some unforeseen disaster will stop the Barcelona star from extending his record breaking championship run.

Raga is assured of finishing the year as vice champion as he is already more than forty points clear of current third placed Japanese campaigner Takahisa Fujinami –Repsol Honda. Fujigas will have to ride at his best to hold off fellow veteran, Spain’s Albert Cabestany –Sherco. Cabestany in turn is being pressed hard by the third Repsol Honda teamster, young Spaniard Jaime Busto and also the factory Vertigo duo of Jeroni Fajardo and James Dabill.

The championship minor placings will be fought over by this elite group of riders who are well clear of the remaining contenders and their fate probably will not be decided until the final section on Sunday.

Italian hopes rest with Gas Gas pairing Matteo Grattarola and Gianluca Tournour. Gratarola currently sits in ninth place in the general standings, but just two points ahead of Germany’s Franz Kadlec – Gas Gas so Matteo needs to be on top form as he shoots for a top ten ranking.

Jack Price – Gas Gas, rides the final Trial2 round as the overall winner of this class while second placed Welsh rider Iwan Roberts – Beta, has still to fend off Spain’s Arnau Farre – Gas Gas, Briton Dan Peace – Gas Gas and Frenchman Gael Chatagno – Sherco. With the best thirteen scores from the fifteen individual days competition, currently it is impossible to forecast the final positions. Newly crowned Trial125 winner Jack Peace – Gas Gas and younger brother of Dan, will be an interesting addition to this class as he opts to ride Trial2 for the last event of 2016. Luca Petrella – TRS and Filippo Locca – Beta head an eight man Italian attack in their home round while Trial125 runner-up, German Max Faude – Beta also moves up to Trial2 for the final round.

Despite Peace’s absence, the Trial125 class still boasts fourteen entrants boosted by three home country riders, Lorenzo Gandola –Scorpa, Mirko Spreafico – Gas Gas and Carloalberto Rabino – Beta. With a high level of passion from the Italian fans guaranteed, the final Grand Prix of the 2016 FIM Trial World Championship is set to be a fitting climax to the season and the perfect stage to potentially crown King Toni X.