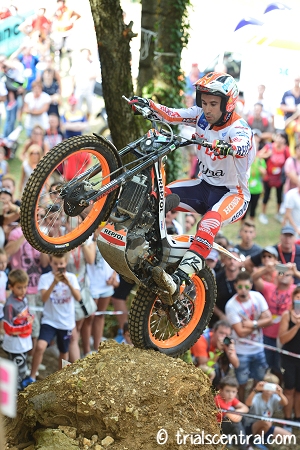 Very much as expected Toni Bou – Repsol Honda signed off from the 2016 FIM Trial World Championship with yet another victory, his second of the weekend at the Italian GP in Chiampo and his twelfth of the campaign. Whilst today his margin of victory was less than yesterday he still won the final day of the season by fourteen marks from Adam Raga – TRS. Raga is one of just three riders who have inflicted defeat on Bou this season, the other two being Albert Cabestany – Sherco and his team mate Takahisa Fujinami – Repsol Honda.

For the second day running and for only the third time this year Jeroni Fajardo – Vertigo rounded out the podium on what has been by far the best weekend of competition for the experienced Spanish rider. Fajardo had to fight hard for his third spot and was pushed all the way on yet another sweltering day by Cabestany who finished just two marks back from his compatriot. Unfortunately, fourth place was not sufficient for Cabestany to climb the order as he ended the year in fourth spot in the final standings.

Despite nursing his injured wrist, Fujnami was magnificent in front of the thousands of passionate Italian fans for who he put on a show of bravery and skill topped by his normal exuberance. Fujinami was rewarded for his efforts with fifth on the day, which was enough for him to hold on to an excellent third spot in the general standings. There was even more for the home crowd to cheer about as Matteo Grattarola – Gas Gas recorded his equal best result of the season in sixth place. Jaime Busto – Repsol Honda, Jorge Casales – Beta, Miquel Gelabert – Sherco and James Dabill – Vertigo were the last four riders respectively to finish in today’s top ten.

In terms of the loudest cheer, that was reserved for Luca Petrella – TRS who took his maiden victory in the Trial2 class at his home GP. Petrella ended the day well clear of overall class winner Jack price – Gas Gas who at least made some amends for his terrible showing yesterday. Price’s British compatriot Iwan Robert’s – Beta complete today’s rostrum as he clinched the runners up spot in the series too. Day two’s top five was rounded out by Gael Chatagno – Sherco and Dan Peace respectively, the latter of this pairing also securing third in the final standings to finalise an all British 1-2-3 in this class.

Completing back-to-back wins, it was again Lorenzo Gandola – Scorpa who lead home his fellow countryman Mirko Spreafico – Gas Gas for a second Italian 1-2 of the weekend in this class, with Spaniard Eric Miquel –Sherco having to be content with third spot for the second day in a row. Miquel also ended the series in third place behind overall class winner Jack Peace – Gas Gas and Max Faude – Beta, respectively both who rode in Trial2 class this weekend.

With the all individual FIM Trial Word Championships now decided, the attention now shifts to next weekend’s team competition, as the FIM Trial des Nations is set to take place in Isola 2000, France.