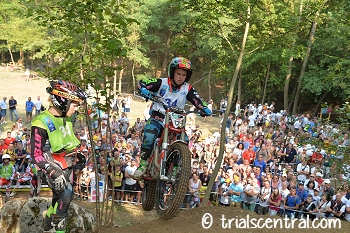 Chiampo, in the Italian province of Vicenza, was the venue chosen to host the last event of the international trial season. This was a place with a family atmosphere for the official Gas Gas Factory FG Trial Team. It was an Italian GP full of homely feeling where a fruitful season of wins for Gas Gas was celebrated by the winners of two of the four categories making up the World Championship.

With the Trial125 and Trial2 titles in the bag, already decided and won by Jack Price in Tong in the British GP, and Jack Peace in Comblain-au-Pont in the Belgian GP, Dan Peace’s fight for third position in the World Championship in the junior category, certainly made the Trial2 teams concentrate on him.  And in fact the young British rider made huge strides in the right direction on Saturday with a really close victory. This was after a favourable decision made after a triple draw between the first three riders in the classification. This victory together with a fifth place on Sunday, the next day, was what pushed Dan Peace up one place on the table to eventually finish in third place in the Trial2 World Championship.

Fellow British rider Jack Price, with the self confidence of already knowing he was champion since the British GP, meant that in Chiampo he got a relaxed fifteenth position on Saturday and a second place on Sunday. This was a great ending to a fantastic season for the incredible winner of the Trial2 World Championship. Meanwhile Marc Riba, rider of the Spea RFME team supported by Gas Gas, was the star of one of the best performances in the World Championship, finishing tenth on Saturday, he made it into the top ten, and gaining two places the next day, Sunday, he finished off the season in twelfth position in Trial2.

The World Champion of Trial125 had his first ride on his new Gas Gas TXT250 Racing in the last GP of the season in Trial2. Although there was added difficulty due to the large jump in engine capacity in this category, Jack Peace finished with very healthy 18thand 14th positions in the Italian GP, his first time riding in this category.

Without the young British rider competing in Trial125, it was young Italian rider Mattia Spreafico who was in charge of taking Peace’s place with the small capacity engine, winning encouraging second places in the only appearance of the rider from the Spea Gas Gas Italia team this season in the World Championship, while taking advantage of a visit to his country.

Matteo Grattarola made a great performance in his home GP in the highest category: TrialGP. Recently proclaimed Italian Indoor Trial champion for the sixth time, just a few days before Varazze, the top Gas Gas rider in Italy won two valuable eighth and sixth positions meaning that Grattarola, once again, gets to stay in the elite top ten of the Trial World Championship with his ninth position in TrialGP.

The results were rather more modest for Franzi Kadlec, Gianluca Tournour and Häkon Pedersen. The German Gas Gas rider finished 14thand 11th In Italy. These two latest results finally place Kadlec in eleventh place in TrialGP. Meanwhile the Italian rider Gianluca Tournour (16th and 14th) and the Norwegian Häkon Pedersen (17th and 17th), close the World Championship with positions rather lower down in the classification.

Finally, Sandra Gómez gave Gas Gas something to smile about in the Women’s category, with another podium position. The rider from Madrid finished in second place on Saturday, and the next day finished sixth. This position, although not making Gómez very happy, did give a boost to the rider from Cercedilla up to second position in the classification with two of the three events in the Women’s World Trial Championship having already been held. This competition is set to finish 9th September in Isola2000, France.