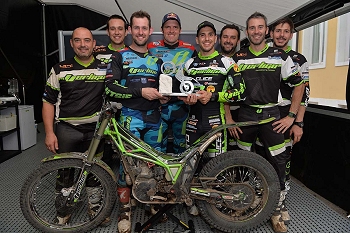 The Italian town of Chiampo proved to be a fitting venue to host the final Grand Prix of the 2016 FIM Trial World Championship, with the two days of closing competition being played out in scorching temperatures. The occasion proved to be an historic one for the Vertigo factory team as they secure second place in the manufacturers World Championship in this the first season they have fielded two riders in the entire series.

Situated in the north east part of the country, this was the first time that the town of Chiampo had held a Trial GP, but it is sure not to be the last with Italian fans packing the course over the weekend. From the opening man made hazard directly in front of the town hall the riders made the eight kilometre transfer to the neighbouring hills where the remaining eleven natural hazards could be found in close proximity to each other. The already tough sections, some on dry banking and the other in the slow flowing river took on an extra level of severity as the high temperatures brought fatigue to the riders.

Unaffected by the hot weather the fuel injected Vertigo Combat once again showed its adaptability and capability in the testing conditions as Jeroni Fajardo immediately established himself as a podium contender during Saturday's Trial. Whilst no one was able to match the form of eventual winner Toni Bou, Fajardo found himself just a single mark back from runner up Adam Raga after the first lap. Despite losing ground to Raga on the second tour, Jeroni produced his best lap score on his final visit to the twelve sections to secure his second podium place of the season in third spot. Fajardo's team mate James Dabill fared less well on day one and had to be content with tenth position as the very unlike British conditions took their toll.

Sunday's Trial played out in similar style with only minor changes to three sections doing little to change the severity as the sun shone strongly overhead once again. With some strong riding for the second day in a row, Fajardo again put himself amongst the front runners from the outset and further strengthened his position over the closing two laps to claim his second podium finish of the weekend to round off the series with his best results of the season. Unfortunately, Dabill was unable to sign off with the same level of success and had to settle for tenth spot again, but happy that he had played his part in helping Vertigo become vice World champions at their first full assault.

Pleased with his last GP performance, Jeroni said. "Firstly I am very happy for the Vertigo team, finishing second is a great result and is a great reward for everyone's effort. From a personal view, I can be happy too. To be on the podium was always my goal and to be able to achieve it twice here in Italy has given me great confidence as we go into the winter period."

Commenting on his own showing, Dabill stated. "It has not been the best weekend for me, but the good news is that as a team we have managed to take second in the manufacturers championship which is a really great result all round. After yesterday we made some changes to the bike, but I have not been able to find a good setting on the new bike over the two days, but I am sure with some more work I can be back to best again soon."