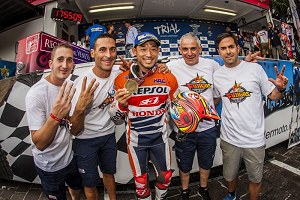 After Saturday's overwhelming triumph, where Toni Bou sealed a tenth outdoor title and a twentieth world championship, on Sunday the Repsol Honda Team was back with a another win. Teammate Takahisa Fujinami took the world championship bronze.

Repsol Honda Team wrapped up the 2016 season with a notable day out on day two of the Italian GP in Chiampo, in the Veneto region. The team can now add a third place final podium finish for Japanese rider Takahisa Fujinami to the championship title secured by Toni Bou yesterday.

Toni Bou brought his Trial World Championship victory tally to 89 and rounded off a magnificent season with a twelfth win. Today, Sunday, saw Bou take the honours with a fourteen point advantage over Adam Raga.

The Italian Grand Prix marked an emotional finish for Takahisa Fujinami. The Japanese Repsol Honda Team rider kept the competition in check and battled against continual wrist injury pains to defend a third place, which never looked in much doubt. A fifth spot on the day was enough to guarantee the bronze medal five years after having last clinched it in 2011 at Isola 2000.

It was a toilsome day for Jaime Busto, who suffered on the first lap with an accumulation of marks for simple errors. The young Basque rider found himself slipping down the leaderboard, before rallying on laps two and three, to post a seventh place on the day. Busto, likewise, repeated the seventh position in the final world championship standings.

The action doesn’t finish here for Repsol Honda Team, who are due to take part in an important competition: the Trial des Nations. Two of the trio, Toni Bou and Takahisa Fujinami, will be taking part with their respective nations: Spain and Japan.