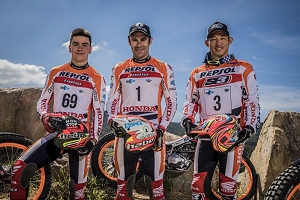 Toni Bou, Takahisa Fujinami and Jaime Busto line up as the Trial Outdoor World Championship season gets underway this weekend. The much anticipated championship opens in Camprodón, Spain where Repsol Honda Team will once again go in search of the title.

Sunday 14th May sees the opening round of trial’s top category with the Spanish GP. The event which has been a regular feature in the trial calendar every year since 1975, will this time make its first visit to Camprodón – a natural enclave just fifteen kilometres from France in the heart of the Pyrenees. The championship begins with a Repsol Honda Team trio raring to go and keen to improve on previous results. Behind the bars of the Montesa Cota 4RT, the riders of the team managed by Miquel Cirera and Òscar Giró, will face a tough challenge, particularly as the 2017 season will have some new features.

Ever since Toni Bou scooped his first world title back in the 2007 indoor championship, the Catalan rider has managed to clinch the indoor / outdoor double every single year without fail. Bou now sports a full decade of absolute domination of the trial scene and is hungry to keep on going. Bou was recently re-crowned X-Trial world champion for the eleventh consecutive time. With the indoor title in the bag the rider now moves on to the more taxing and troublesome outdoor discipline in a bid to renew the number one currently emblazoning the Montesa Cota 4RT.

At 37 years of age Takahisa Fujinami is the most veteran rider in the paddock, but in spite of this maintains a level of physical fitness, technique, tenacity and ambition that are the envy of his adversaries. Last season the team stalwart posted third overall place in the championship. A lot of water has passed under the bridge since the Japanese Repsol Honda Team rider won the world title back in 2004, but as he admitted to Bou at the end of the 2016 campaign, there is nothing he would like more than to retire as champion. Charismatic ‘Fujigas’, the rider with most participations and points achieved at World Championship, will be looking to sustain the momentum for as long as possible and sees the top of the podium as a distinct possibility for 2017.

Basque rider, Jaime Busto tackles a third season with Repsol Honda Team, well aware that he needs to take a leap forward on the scoresheets. This winter, the team’s youngest rider has diligently trained alongside team-mate Toni Bou in a bid to raise his level. A podium finish still remains the maximum priority for the rider from Górliz, after having narrowly missed out on the feat on various prior occasions. Busto, likewise, will be wishing to improve on the sixth overall position in which he has finished the two previous seasons.