World Championship Gets Underway This Weekend 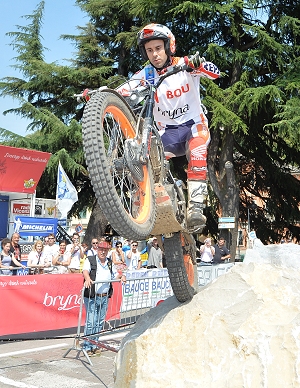 The greatest riders on the planet will converge on Camprodon in Spain in just two days' time for the opening round of the 2017 FIM Trial World Championship.

The thirty-year-old Spanish superstar with eighty-nine TrialGP wins to his name is the most dominant rider in the championship's forty-three-year history. He is bidding for an unprecedented eleventh consecutive title, but there is a whole host of extremely talented riders - including two former champions - lining up to try and stop him.

Heading the list of challengers aiming to dethrone Bou is Adam Raga - TRS. FIM Trial World Champion in 2005 and 2006, the Spaniard has finished every season since as runner-up to Bou, though remains fiercely motivated in his quest to complete a hat-trick of titles.

Entering his twentieth year of World Championship competition, Raga has won fifty TrialGP rounds, but has not savoured the sweet taste of victory since the opening day in Japan in April 2016.

The most recent rider to inflict defeat on Bou is Japanese fan favourite Takahisa Fujinami - Repsol Honda who was World Champion in 2004 and finished in third place last season. At the age of thirty-seven Fujigas is embarking on his twenty-second World Championship campaign and will be determined to add to his total of thirty-three event wins at this level.

The passing years have not blunted his passion for the sport or softened his explosive, all-action style that proved so effective last June when he comprehensively beat Bou on the second day of competition in France.

Bou was only defeated on one other occasion in 2016. The shock loss came at the very first round in Spain at the hands of home hero Albert Cabestany - Sherco whose ninth TrialGP victory gave him an unexpected early lead which he relinquished the very next day when he slumped to seventh.

The only other rider in action this weekend who knows what it is like to win at this level is fifth-ranked Jeroni Fajardo - Vertigo, the Spaniard claiming his sole victory in 2009.

The statistics paint a picture of an exclusive five-man club, although this does not mean you can rule out the possibility of another rider taking a debut win in 2017.

After finishing the 2016 TrialGP series in sixth, talented Spanish teenager Jaime Busto - Repsol Honda will be setting his sights on climbing higher up the FIM Trial World Championship ladder and at the very least score a career-first podium.

Standing on an FIM Trial World Championship podium is an experience James Dabill - Gas Gas has enjoyed four times and something he will be hungry to replicate this season. In 2016 Dabill recorded three podium finishes including a career-best second place on the opening day of his home round in Great Britain.

Going by last year's scores the only other rider with a realistic chance of producing a top-three finish is Spain's Jorge Casales - Beta who was fourth on the opening day in France last season.

However, with the new format including a timed qualification section to determine starting order promising to level the playing field this could be the season when the established hierarchy receives a surprise wake-up call.