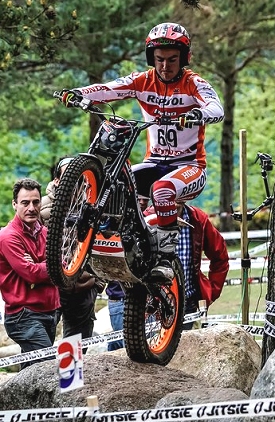 Jaime Busto - Repsol Honda topped qualification at the opening round of the 2017 FIM Trial World Championship and will start tomorrow's TrialGP Spain held in Camprodon at the back of the eighteen-man TrialGP field.

With the objective to stay clean in as quick a time as possible, Busto raced through the big, grippy rocks that formed the qualification section in a lightning-fast 0:29.47 to beat his team-mate and defending FIM Trial World Champion Toni Bou - Repsol Honda into second. Bou's time of 0:30.29 was six-tenths of a second faster than Adam Raga - TRS who was third.

"I have missed the podium by one or two points on a number of occasions," says Busto, "but this year I'm confident that I can produce podium finishes and also improve in the championship."

"This is my third year with Repsol Honda so I feel at home in the team, have much more experience and know the bike very well and how it responds in different conditions."

With all but five of the TrialGP riders going clean, the slightest mistake proved costly and a single dab from third-ranked Takahisa Fujinami - Repsol Honda means he will be fifth rider away tomorrow morning.

The qualifying result was even worse for fourth-ranked Albert Cabestany - Sherco whose two-mark total means he will start second tomorrow behind Italy's Matteo Grattarola who recorded the only failure.