Japan Awaits As TrialGP Moves On 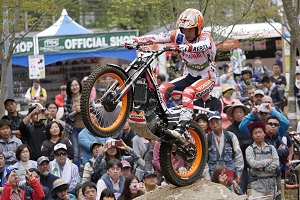 The Twin Ring Motegi facility holds a unique place in the annuals of the FIM Trial World Championship and will add to its long and illustrious history this coming weekend when it is the venue for TrialGP Japan, round two of the 2017 series.

Built by Honda in 1997, it was the venue for the very first TrialGP Japan ever held in 2000 and every year since has hosted a round of the championship - an unparalleled record that is unmatched in the series' forty-three-year history.

Named after its two Tarmac race circuits, Twin Ring Motegi lies ninety miles to the north of Tokyo and over the years has seen six different winners of the sixteen events over thirty-two counting days staged there - four of whom will be competing this weekend.

Predictably, Spaniard Toni Bou - Repsol Honda, the reigning and ten-time FIM Trial World Champion, tops the roll of honour with a record of fourteen wins at the venue since he made his first appearance there in 2004.

Incredibly, the other three previous winners in action this weekend have all competed at the venue every year since it made its debut on the FIM Trial World Championship calendar. Home favourite Takahisa Fujinami - Repsol Honda and Spain's Adam Raga - TRS have both won in Japan on six occasions and Spain's Albert Cabestany - Sherco has won twice.

The only two other riders to have savoured the sweet taste of victory there are both British - Dougie Lampkin who has won five times including the first four visits to the facility and Graham Jarvis who won the second day in 2003.

Understandably, Fujigas will enjoy the most support from the knowledgeable Japanese fans who turn out in their thousands to watch the best Trial riders on the planet and it is this fervent backing that he feels has spurred him on to take more wins here than at any other venue along with a record twenty-six podium finishes.

"This has always been an event in which I have got very good results," says Fujigas. "I think it's because it's my home and my people and they encourage me and motivate me to fight for victory."

"It can be very difficult if it rains, but they change the sections around every year, moving them and making it different. As for the spectators, in the beginning it was Trial riders and Trial fans, but now there are spectators of all kinds wanting a show that only the best riders in the World can give them."

"This is a unique event," he adds. "There is no other place that over the last seventeen years has hosted the World Championship in the same location. This is because the organisers strive hard to continuously change the sections."

"Before there wasn't much knowledge of this sport in Japan, but over the years the organisation has figured out the details of trial perfectly and it's become a very important event for them."