TrialGP Prepares for Round Two This Weekend 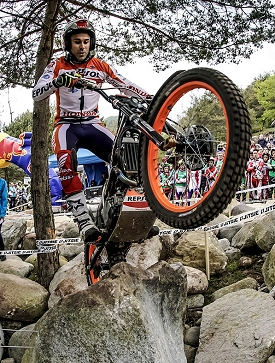 Defending champion Toni Bou - Repsol Honda heads into the second round of the 2017 FIM Trial World Championship at Twin Ring Motegi in Japan this coming weekend holding a three-point lead at the top of the table following his commanding win at the series opener in Spain.

After a rain-hit opening lap in Camprodon the top three riders were separated by just three marks with Albert Cabestany - Sherco leading on twenty-seven from Bou on twenty-eight and former champion Adam Raga - TRS on twenty-nine.

Ten-time champion Bou then demonstrated his sheer class by demolishing his rivals on lap two, pulling twelve marks clear of Raga and twenty-six marks ahead of Cabestany.

"After starting the World Championship with a victory now it's on to the second round in Japan, one of my favourite destinations," says Bou. "There I have won many times and the victories in Motegi are very important as it's the home of Honda and HRC so we will have to be at the highest level."

All three Spaniards have won at the venue in the past with Bou boasting fourteen TrialGP Japan victories compared to Raga's six and Cabestany's two, but the talented trio are by no means the only riders in podium contention at Twin Ring Motegi.

Fourth in Camprodon, Spain's Jeroni Fajardo - Vertigo has been on the podium in Japan six times, his most recent rostrum visits coming in 2015 when he was third on day two after finishing second the previous day.

Crowd favourite will undoubtedly be home hero Takahisa Fujinami - Repsol Honda who has won there six times and holds the record for podium finishes with twenty-six to his name, both statistics he will be determined to add to after finishing fifth at the opening round.

Jorge Casales - Beta and fellow Spaniard Jaime Busto - Repsol Honda finished sixth and seventh respectively in Camprodon. Busto in particular was disappointed with his result and is aiming for a career-first podium in Japan.

Finishing eighth in Spain, reigning British champion James Dabill - Gas Gas fought back from a poor opening lap to record a second lap total only bettered by Bou and Raga and if he can reproduce that form this weekend will be a podium threat.

Also in action this weekend coming will be the Trial2 and Trial125 classes.

Third last year, Britain's Dan Peace - Gas Gas will be aiming to improve on his fifth at round one behind Spain's Francesc Moret - Honda.

In the Trial125 class Italian Lorenzo Gandola - Scorpa won by five marks from Britain's Billy Green - Beta with diminutive French rider Hugo Dufrese - Gas Gas two marks further back. The top two will be present in Japan to do battle in this class once again.

Unlike the European rounds that follow a two-day format, TrialGP Japan will start on Friday with the new timed qualification to determine starting order that proved to be so exciting in Spain, before vital championship points are at stake on both Saturday and Sunday.