Double for Toni Bou At Home Of Honda 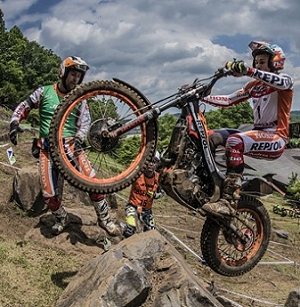 Bou's victory on Sunday, his ninety-second career TrialGP win, means he heads into round three of the championship in Andorra on 17/18 June with a fifteen-point lead following his perfect start to the season.

After heavy rain on the opening day made sections incredibly slippery, bright sun on Sunday dried the course and resulted in a much lower-scoring event.

Bou's opening lap total of just eight gave him a six-mark lead over Adam Raga - TRS at the halfway stage, but a couple of uncharacteristic mistakes on the second lap from the defending FIM Trial World Champion allowed his fellow Spaniard back into contention.

Forced to start near the front after his disaster in Friday's qualification, Raga tried to hang back as much as possible and picked up a time penalty on his opening lap. But as conditions continued to improve he dramatically closed the gap and his second lap score of nine meant Bou was only assured of victory by two marks when he cleaned the final section of the Trial.

"I felt the pressure on lap two because we're in Japan so it's very important to take the victory for the team. Next up it's my 'home' event Andorra which is also very important for me."

The conditions meant running order was not as crucial although section seven was still incredibly tough once mud had been dragged onto already smooth and slippery rocks. Taking maximum scores from the entire TrialGP field on the opening lap, Jaime Busto - Repsol Honda recorded the only clean here on lap two.

Along with Bou and Raga, Albert Cabestany - Sherco picked up two maximums on section seven, but after slumping to eighth on day one the Spaniard was back in contention and ended the day third, eight marks behind the winner.

Spain's Jeroni Fajardo - Vertigo won a close fight for fourth after recording the lowest second lap total of the Trial for a two-mark advantage over Takahisa Fujinami - Repsol Honda who beat Busto into sixth on a tie-break.

Following his second-placed finish the previous day, Britain's James Dabill - Gas Gas was in contention after lap one, but he slipped to seventh, one mark behind Fujinami although still a comfortable eighteen marks clear of Germany's Franz Kadlec - Gas Gas in eighth.

In a reversal of Saturday's result, Italian Lorenzo Gandola - Scorpa took victory in Trial125 from early leader Billy Green - Beta after the British rider picked up two fives on the final lap including a maximum when he was deemed to have stopped forward motion. Spain's Eric Miquel - TRS matched his day one result with third.

After a hectic start, the series will now enjoy a short break before resuming in the mountains of Andorra in mid June.