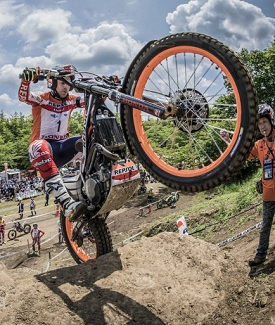 Repsol Honda Team rider Toni Bou was once again victorious in Motegi, in a far easier trial than the previous day, maintaining a score equal to the other top riders. Takahisa Fujinami today posted fifth and Jaime Busto was sixth, level on points.

Another victory for Toni Bou in Japan as the champion continues the full house of victories in the 2017 season. The Repsol Honda Team ace commanded a trial that proved to be a walk in the park compared to yesterday’s rain-soaked affair. The skies had cleared and the mud had dried by the time the competitors went through. As a consequence however, the difference between adversaries was drastically reduced. A series of errors tightened the fight for the championship leadership, which was not decided until the final fifteen sections of the course. This marks the sixteenth win for Bou in Motegi and allows the rider to stretch his advantage in the overall world championship standings to fifteen points over Adam Raga.

Japanese Repsol Honda Team team-mate Takahisa Fujinami once again went in search of the podium, although a minor error was enough to stop the rider repeating the success of yesterday. Fujigas posted fifth on the day.

Jaime Busto pushed hard in the second lap after a less-than-brilliant first time round. Lap two brought a five in section three before the young Basque produced a string of good results to take him level on points with team-mate Takahisa Fujinami. In spite of the draw the rider had to settle for sixth place as he had done yesterday.

Next date for the World Trial Championship takes place on the 17th (qualifying) and 18th (race) June in Sant Julià de Lòria, Andorra. The weekend before Bou and Busto will be in action in the Spanish championship in Arnedillo.