TrialGP Moves On To Andorra 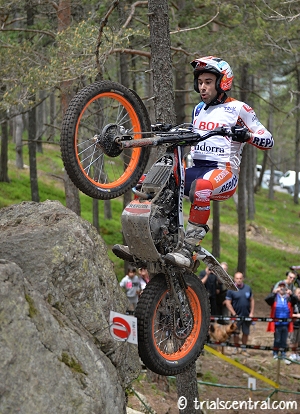 The thirty-year-old Spaniard, bidding for an amazing eleventh consecutive TrialGP title, has been in fantastic form since the start of the year and has won every event he has contested indoors and outside in 2017.

For round three of this year's FIM Trial World Championship at Sant Julia de Loria he will enjoy 'home' advantage having moved to the Pyrenees principality. Add to this his double win in Andorra last year and it would be a brave man willing to bet against him maintaining his sensational winning-streak.

However, while he will certainly start as a strong favourite to take his ninety-third career TrialGP victory it would be a mistake to underestimate his opposition led by fellow Spaniard Adam Raga - TRRS.

Raga won both days in Andorra in 2015 and he showed on the second lap on day two in Japan that he has got what it takes to outride his great rival. If he can reproduce that sort of form over both laps at Sant Julia de Loria then another Bou victory is by no means a foregone conclusion.

Saturday's timed qualification to determine starting order for Sunday's main competition could also play a big part in the outcome. It was Raga who suffered in Japan with an error putting him near the front of the field which resulted in his worst finish since 2012 on day one and if Bou makes a similar mistake he could find himself on the back foot all day.

Currently third in the title chase after consistent fourth-placed finishes, Jeroni Fajardo - Vertigo took his sole TrialGP victory in Andorra in 2009 and the Spaniard will be aiming for a repeat performance.

Sitting fourth after two rounds, Spain's Albert Cabestany - Sherco has won four times in Andorra with his most recent victory coming in 2012. Another victim of a poor qualification performance in Japan, Cabestany struggled on the opening day before fighting back on day two.

Takahisa Fujinami - Repsol Honda is fifth behind Cabestany and while he has never won a TrialGP Andorra the Japanese all-action fan favourite can never be ruled out.

British hopes rest on the shoulders of sixth-placed James Dabill - Gas Gas who equalled his career-best finish with second on day one in Japan and he is followed in the championship table by Spaniards Jaime Busto - Repsol Honda who so far has failed to find his form this season and Jorge Casales - Beta.

In the Trial2 class Britain's Iwan Roberts - Beta will be looking to repeat his day two victory in Japan and extend his championship lead over Spain's Francesc Moret - Honda and Gael Chatagno - Gas Gas from France. After two disappointing rides in Japan, round one winner Gabriel Marcelli - Honda from Spain will be determined to claw back valuable points.

It is too close to call in Trial125 where Italian Lorenzo Gandola - Scorpa and Britain's Billy Green - Beta have traded wins and second places since the opening round with Gandola currently just having the edge. Spain's Eric Miquel - TRRS is third but may struggle to threaten the top two in the mountains of Andorra.