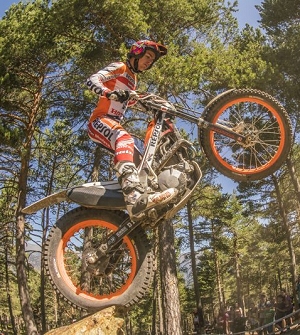 Two Repsol Honda Team riders made it onto the podium in round three of the TrialGP World Championship disputed this weekend in Andorra. Jaime Busto finally grabbed a top-flight rostrum place, while team-mate Toni Bou took the third spot.

The big name this weekend – if champion Toni Bou doesn’t mind – is Jaime Busto. After commanding the qualifying round yesterday, the young Repsol Honda Team rider showed great focus and technique today. Busto led for most of the event before taking second place at the close. A mere point separated the promising younster from the day’s eventual winner Adam Raga. This marks the first world championship podium spot for the Basque rider since he debuted in the top category in the 2015 season.

Toni Bou meanwhile, conceded five of the fifteen point advantage that he had at the start of the trial to arch-rival Adam Raga. The third place overall was caused by a serious error in one of the final sections of the first lap, which saw the champion miss one of the obligatory passes. In spite of notching up the top score on lap two, with six marks, Bou finished a point adrift of his team-mate and two behind the day’s winner.

The remaining rider of the Repsol Honda Team trio, Takahisa Fujinami, was in the battle for a top finish until one too many mistakes saw the Japanese rider have to settle for fifth place. Fujigas is now in fourth position in the Championship standings.

There will be no break for the world championship which stops off in Lourdes, Frances, for the fourth date of the season next weekend. Like the rest of the European dates, the competition will be just a single-day event on Sunday.