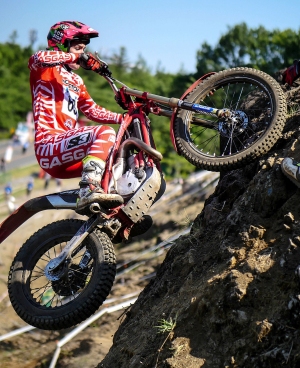 Three days of competition and three different winners as Jaime Busto recorded his first TrialGP win.
Image courtesy of Makoto Sugitani
The sensational shake-up at the very top of the sport continued today on the second day of TrialGP Japan - round two of the 2018 FIM Trial World Championship - at the Twin Ring Motegi circuit. In his fourth year in top-flight Trial, Jaime Busto - Gas Gas finally claimed a career-first victory, although the shocks didn't extend to TrialGP Women where Emma Bristow - Sherco took her second win of the weekend. At an event where HRC were looking to celebrate one hundred TrialGP wins for Toni Bou - Repsol Honda in their own backyard, instead it was Gas Gas who did the double with their two new signings for 2018 as Busto replicated his team-mate Jeroni Fajardo's victory the day before.

Busto got off to a shaky start with the only maximum on section two on the opening lap, but the twenty-year-old made amends with a superb single-mark score on section thirteen which, along with five other sections, had been made harder after yesterday's Trial. Comprising a series of huge black, polished rocks with a monster step to finish, the awkward approach to this imposing exit was where the Trial was won and lost. With Bou looking to be back in full control up to this point after his surprise slip to fourth on the opening day, the eleven-time champion took a maximum to bring Busto back into contention.

It was actually Adam Raga - TRRS who led after the opening lap. The two-time World Champion's inch-perfect clean on section thirteen put him on a score of just eight at the halfway point compared to Bou's eleven and Busto's twelve, but his hopes of victory began to unravel at the start of the second lap when he too took a five at section two.Section fourteen had been almost universally cleaned on the opening lap while section fifteen had taken maximums from the entire field so when the Spanish trio arrived at section thirteen for their second attempts it was crunch time. With Busto on a total of thirteen, Bou and Raga on fourteen and Fajardo still in with an outside chance on eighteen, the tension - increased by thirty-degree heat - was palpable. Fajardo had looked out of contention following his opening lap of eighteen. The Spaniard had dragged himself back into the hunt with a faultless final lap up to this point, but his chances of a second victory were finally derailed when he scored a maximum and his compatriot Raga suffered the same fate. Bou struggled through for a three to keep his hopes of winning alive, but Busto sealed his first top-flight victory with another sensational single-mark ride. "I am very, very happy," said Busto. "I had such a good feeling with the bike and I can't believe I have won. It is amazing."

After everyone apart from Spain's Jorge Casales - Vertigo took a maximum on section fifteen, the Trial finished with Busto on nineteen from Bou on twenty-two with Raga completing the podium on twenty-four, four ahead of Fajardo.

Spain's Albert Cabestany - Beta, who cleaned section thirteen at both attempts, was six marks further back and took fifth on a tie-break with Britain's James Dabill - Beta. Casales was next on thirty-eight before a big gap to Spaniard Miquel Gelabert - Sherco. Home hero Takahisa Fujinami - Repsol Honda, a fabulous third on Saturday, rounded out the top ten along with France's Benoit Bincaz - Scorpa. Bou now heads both Busto and Fajardo by 2 points in the general standings after two rounds.

Emma Bristow underlined her status as the reigning Queen of Trial with a commanding victory in the TrialGP Women class. The British star - who is aiming to make it five consecutive titles this season - secured back-to-back victories in Japan with a score of sixteen which was less than half that of second-placed Maria Giro - Montesa from Spain who parted with thirty-three. "It was a tougher Trial today which suited me a bit more," said Bristow. "I had a bit of a lead going into the second lap so I made sure I rode within myself and was confident through every section."

Spain's Berta Abellan - Vertigo matched her third place yesterday with a total of thirty-four, two marks better than Norwegian Ingveig Hakonsen - TRRS and three ahead of Neus Murcia - Beta from Spain who rounded out the top five. In a sport where consistency is key, Spain's Sandra Gomez - Gas Gas, who was runner-up on Saturday, ended today's Trial all the way back in seventh and it wasn't a lot better for Germany's Theresa Bauml - Montesa, another highly-fancied rider, who slipped from fourth yesterday to fifth today. Bristow has already opened up a 10 point advantage over her rivals in the title race.

In Trial2 it was Matteo Grattarola - Honda who finished on the top step of the podium after claiming second on Saturday. The thirty-year-old Italian - winner of round one at Camprodon two weeks ago - dominated today with his score of five leaving him comfortably clear of Spain's Gabriel Marcelli - Montesa who completed both laps with eleven marks lost. Britain's Toby Martyn - Montesa, yesterday's winner, came home third a further two marks off the pace, but three ahead of his fellow countryman Dan Peace - Gas Gas who took fourth on a tie-break from Spain's Marc Riba - TRRS. Grattarola's second win now puts him nine points clear of Martyn in the overall standings.

Italy's Alex Brancati - Beta backed up her win yesterday with victory today in the Trial2 Women class with her total of sixteen marks lost just three better than Saturday's runner-up Maddie Hoover - Gas Gas from America. Sophia Ter Jung - Beta ended the day a further two marks adrift in third with the seventeen-year-old German leap-frogging her compatriot Mona Pekarek - Sherco, who took the final step of yesterday's podium, on a tie-break. Norway's Erika Melchior - Sherco claimed her second fifth-placed finish of the weekend on twenty-two. Brancati now has a six point cushion over Hoover heading into round two.

After slipping to fifth on Saturday, round one winner Billy Green - Beta returned to the top of the super-competitive Trial125 class, but it took a most-ones tie-break to separate the sixteen-year-old British rider and Spain's Eric Miquel - TRRS after the pair ended the Trial locked together on twelve marks lost. Finishing five marks behind the winner, Spain's Pablo Suarez - Gas Gas claimed third on a tie-break from Arthur Rovery - Sherco from France to match his day-one performance. France's Fabien Poirot - Gas Gas finished fifth on nineteen, three marks ahead of yesterday's winner Martin Riobo - Gas Gas from Spain. Today's victory sees Green create a four point gap between himself and Riobo before the battle resumes in Andorra for all the male classes in just under two weeks time.