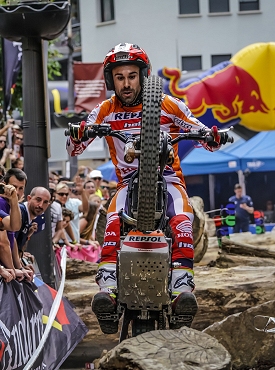 The sublime skills of eleven-time FIM Trial World Champion Toni Bou - Repsol Honda carried him to victory in this afternoon's dramatic qualification session at TrialGP Andorra, round three of the 2018 FIM Trial World Championship. His win means Bou will have the considerable advantage of being last man away tomorrow. Competing on the main street of his adopted home town of Sant Julia de Loria, high up in the Pyrenees principality, series leader Bou topped Q1 ahead of fellow Spaniards Jaime Busto - Gas Gas and Albert Cabestany - Beta and then, as last man away in Q2, knocked two-and-a-half seconds off his earlier time with a blistering run. "It was very difficult because I started last and all the riders were very fast and went clean," said Bou. "After not qualifying well in the first two rounds finally I have a very good section. I think tomorrow it's very important to start at the back."

Comprising a series of huge rocks and giant logs with highly-technical turns on surprisingly slippery Tarmac, the section was made to look easy by the World's best riders with all fourteen competitors in the premier TrialGP class going clean so it was purely down to speed to decide the starting order for tomorrow's points-paying Trial. Busto had been sitting pretty with his time of 26.88 looking good enough for the twenty-year-old to claim his hat-trick of Q2 wins before brilliant Bou blew through the section, spectacularly leaping the logs to record a sensational 25.03 that drew a massive cheer from the big turn-out of spectators who thronged the street. Britain's James Dabill - Beta took third with a typically full-bodied assault that placed him less than a second behind Busto and comfortably ahead of Cabestany and Spain's Adam Raga - TRRS. Raga was the first rider to break the thirty-second barrier and knock France's Benoit Bincaz - Scorpa, who had led from the get-go, off the top spot.

Riding an eased route, victory in the ultra-competitive Trial2 class went to veteran Italian Matteo Grattarola - Honda, the championship leader after two rounds, who was almost two seconds clear of Sondre Haga - TRRS with his fellow Norwegian Hakon Pedersen - Gas Gas taking third. Dan Peace - Gas Gas from Britain was just 0.2 behind in fourth, only 0.03 ahead of Germany's Max Faude - Beta who was fifth. Britain's Toby Martyn - Montesa, who currently sits second behind Grattarola in the series standings, finished a safe sixth. A special mention has to go to reigning TrialGP Women World Champion Emma Bristow - Sherco who is taking on the men this weekend. The British heroine stayed feet-up to claim a rock-solid sixteenth which means she will be tenth rider away tomorrow.

There were lots of mistakes in the Trial125 class as the series' youngest riders went toe-to-toe, but French pocket rocket Hugo Dufrese - Gas Gas hardly put a wheel wrong as he raced through to take pole by over four seconds from his compatriot Fabien Poirot - Gas Gas. Series leader Billy Green - Beta, who flew in last night after sitting exams back home in England, was third after recording a cool and collected clean.

The main action will now shift from the street to the steep hillsides for tomorrow's Trial.