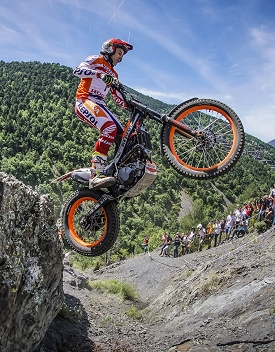 Toni Bou - Repsol Honda held his nerve to take victory at TrialGP Andorra, round three of the 2018 FIM Trial World Championship, following a tense four-way battle at altitude in the Pyrenees principality. With the majority of sections plotted on the almost sheer, rocky hillside just outside Sant Julia de Loria where Bou now calls home, the Trial called for courage and commitment in equal measure and at the end of the day it was the defending eleven-time FIM Trial World Champion who kept his cool in sweltering conditions. The result ties him with British legend Dougie Lampkin on ninety-nine TrialGP victories and paves the way for a possible record-breaking one hundredth win at TrialGP Portugal in one week's time. "The feeling is incredible because in Andorra it is always very difficult for me and today I think it's the best I've ridden this year," said Bou. "I made some little mistakes on the first lap, but I finally made sure of the win in the last section."

Following a close opening lap it was Bou who led on ten from his fellow Spaniards Albert Cabestany - Beta and Jaime Busto - Gas Gas who were tied on eleven with Jeroni Fajardo - Gas Gas a further three marks off the pace. After sharing the wins at TrialGP Japan last time out, both Fajardo and Busto knew victory would hand them the championship lead which only added to the tension. The entire fourteen-rider field collected maximums on section twelve at their first attempt so it was modified for lap two. Bou needed a steadying dab here the second time around while Fajardo sailed through clean, but both Cabestany and Busto collected fives.

The Trial was ultimately won and lost on the very last section of the event, the man-made hazard comprising huge boulders and giant logs in the town's main street that was used for Saturday's qualification session. Fajardo arrived here on a total of fifteen, one ahead of Bou, with Cabestany on eighteen and Busto out of contention on twenty-four. With his second victory of the 2018 campaign in his grasp, Fajardo - whose sole TrialGP win up until this season had come in Andorra in 2009 - collected a shock maximum on what was a relatively simple section. With Bou and Cabestany both nailing inch-perfect rides it meant victory went to Bou from Cabestany by two marks with Fajardo slipping to third on a total of twenty. Busto was next on twenty-four before a five-mark gap to his compatriot Adam Raga - TRRS who won in Andorra last year, but never really looked comfortable after a shaky first lap. Spain's Jorge Casales - Vertigo was the next rider home on a distant forty-six, one mark ahead of British rider James Dabill - Beta. Miquel Gelabert - Sherco from Spain, Frenchman Benoit Bincaz - Scorpa and Britain's Jack Price - Gas Gas rounded out the top ten. The result hands Bou a seven-point lead over Fajardo with Busto a further two points behind as the series approaches the halfway mark.

Seasoned Italian Matteo Grattarola - Honda claimed his third victory of the season in the Trial2 class. The veteran finished comfortably clear of Spain's Gabriel Marcelli - Montesa to extend his series lead to eighteen points ahead of Britain's Toby Martyn - Montesa who could only salvage fifth following an expensive second lap. Following the opening lap it was Grattarola setting the pace on two marks lost, three ahead of Marcelli with Spain's Francesc Moret - Montesa on six and Martyn on seven. A clean second lap from Grattarola made sure of the win as Marcelli added another couple of marks to his total. Britain's Jack Peace - Gas Gas looked out of it at the halfway stage with two early maximums giving him a score of eleven, but he rode out of his skin on the second lap to finish on a total of thirteen. The result earned him third overall - a couple of marks ahead of Moret - and also moves him ahead of his older brother and team-mate Dan into fourth in the championship behind Marcelli. In his first season in the class, 2017 Trial125 champion Lorenzo Gandola - Scorpa continues to grow in confidence and a sensational second lap of just five gave him a total of twenty-one for a career-best finish of seventh. Reigning TrialGP Women World Champion Emma Bristow - Sherco struggled to find her feet on the opening lap, but the British rider improved considerably on lap two to end the Trial a respectable twenty-second.

In Trial125 series leader Billy Green - Beta soaked up intense early pressure from Spain's Eric Miquel - TRRS who was tied with the sixteen-year-old British rider on seven marks lost after the opening lap. Green, who won the second day in Japan on a most-ones tie-break from Miquel, then pulled out a faultless performance on lap two to beat his fierce rival by three marks and take his third win of the series. Spain's Pablo Suarez - Gas Gas was third a further one mark adrift with French rider Arthur Rovery - Sherco fourth on a total of sixteen. With his closest rival Martin Riobo - Gas Gas from Spain struggling to fifth, Green has extended his championship lead from four to thirteen points with two rounds remaining.

The 2018 TrialGP series continues in Portugal next weekend.