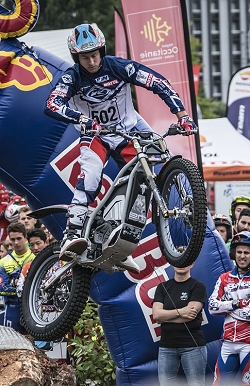 Following on from last year's historic inaugural FIM TrialE Cup, electric bikes will be back in action this coming weekend at TrialGP France for the highly-charged opening event in the expanded two-round series. With battery-powered machines enjoying an ever-increasing profile, 2017's one-round TrialE Cup was an essential addition to the FIM Trial World Championship and it is a natural progression to double the impact of this year's competition. Last year's stand-alone event was staged at Lourdes, but for 2018 the opening round action will move almost five hundred miles to the South East of the country to the scenic Alpine ski resort of Auron. The TrialECup will then sign off one week later at TrialGP Belgium in Comblain-au-Pont.

Marc Colomer - Gas Gas was a clear winner in 2017, but the 1996 FIM Trial World Champion and three-time FIM X-Trial World Champion will not contest this year's series. Instead, he's chosen to hand over the reins of the Spanish factory's radical TXE electric motorcycle to Loris Gubian. While he will not be in action, Colomer - who is in charge of Gas Gas' Trial Sport and Development department - remains a staunch supporter of the TrialE Cup and a passionate advocate of electric Trial competition. "To increase the championship to two rounds this season is good news and we hope in the future that TrialE can be a championship like TrialGP," said Colomer. "At the moment it is difficult to know the future, but we think the Trial discipline is easier to start with electric products. For Gas Gas, electric bikes are a reality and we believe in them for the future."

Last year Marc enjoyed a comfortable victory but if Gubian - who runs an electric Trial school in his native France - is to repeat his win for Gas Gas he will have to overcome stiff opposition led by veteran former top-flight Japanese riders Takumi Narita - Electric Motion and Kenichi Kuroyama - Yamaha. Of the pair it is Kuroyama's participation that is most exciting as he will debut the Japanese giant's prototype electric motorcycle to an expectant audience. Gubian should surely start as favourite out of the eight-rider, five-manufacturer field. The twenty-nine-year-old stepped back from the premier TrialGP class for 2018 and was to have contested the full Trial2 series. Indeed, he kicked off the championship at Camprodon in Spain in May where he finished third, but has since put his ambitions in the class on the back-burner to spearhead Gas Gas' assault on the TrialE Cup starting this weekend in France.