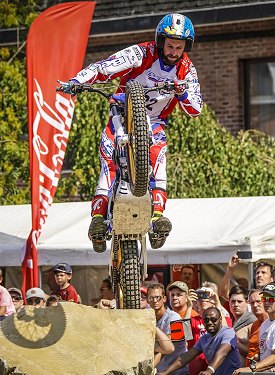 Britain's James Dabill - Beta will have the advantage of starting tomorrow's TrialGP Belgium - round six of the 2018 FIM Trial World Championship - at Comblain au Pont at the back of the field following his sensational qualification victory this afternoon, as Toni Bou - Repsol Honda slumped to tenth place.

A big mistake in the Q1 session that decides starting position for Q2 saw thirty-two-year-old Dabill take a maximum, but he made no mistake at his second attempt. Always happy to hang it out, Dabill mixed up the perfect cocktail of pace and precision to top Q2 by almost half-a-second from Spain's Jaime Busto - Gas Gas with veteran Spaniard Albert Cabestany - Beta another half-a-second further back in third. "I won qualification last year in Japan which was a pretty cool feeling," said Dabill. "I have been trying hard to get another one - it is always nice to start at the back. Every time I ride I just think I have got nothing to lose and go for it!"

Huge piles of sandstone rocks in the town centre formed what was possibly the most technical qualification section we've seen so far this year with sand spread on the cobbled surface calling for inch-perfect positioning and exact throttle control. Cabestany, who also picked up a maximum in Q1, was third TrialGP rider away and despite collecting a rear-wheel puncture he set an early benchmark time of 0:38.04 before Dabill's blistering run. Busto is another rider who is not afraid to twist the throttle and he slotted into second with his compatriot Adam Raga - TRRS moving into fourth ahead of Britain's Jack Price - Gas Gas. Spain's Jeroni Fajardo - Gas Gas, who is currently second in the title fight, picked up a maximum after suffering a technical problem and worse was in store for his fellow countryman Jorge Casales - Vertigo who nose-dived from the top of an imposing roc, but fortunately, the only damage done was to his pride.

Leading after Q1, the scene was set for defending champion Bou to end the qualification session with his fourth successive victory, but a surprise stray dab brought gasps from the large crowd surrounding the section and means the Spanish superstar - who leads the championship chase by thirteen points - will be fifth rider away for tomorrow's points-paying main event.

Victory in the fiercely-competitive Trial2 class went to Britain's Toby Martyn - Montesa from his Spanish team-mate Francesc Moret by just 0:06. Martyn's performance was all the more remarkable given that he was riding with heavy strapping after dislocating his left shoulder in a mid-week practice crash. British teenager Dan Peace - Gas Gas was just over a second further back in third before a gap to Spain's Gabriel Marcelli with Peace's younger brother and team-mate Jack rounding out the top five. Series leader Matteo Grattarola - Honda, who is just one point ahead of Martyn in the standings, could only manage tenth after dropping a mark as he pushed for a fast time.