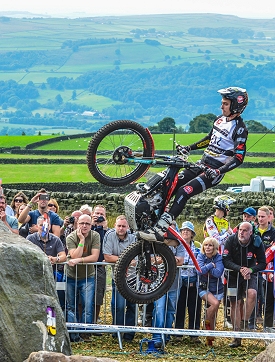 The battle for supremacy in the fiercely-contested Trial2 class goes down to the wire this coming weekend at the Metzler Offroad Park at Pietramurata Di Dro - the spectacular venue for TrialGP Italy, the eighth and final round of the 2018 FIM Trial World Championship. The two men in the hot seat are eighteen-year-old rising British star Toby Martyn - Montesa and veteran Italian Matteo Grattarola - Honda and with just five points separating them the fight to be crowned only the second-ever FIM Trial2 World Champion promises to be super-charged.

It can not be stressed enough how close it is in this class. At the last round - TrialGP Great Britain - the pair were only separated by virtue of Martyn's better qualification performance after the duo were locked together on marks lost as well as cleans, ones, twos, threes and fives. With the all-important Q2 session in Italy taking place under floodlights for the first time ever, both will be hoping their talents shine brightly.

At thirty years of age Grattarola has experience and home advantage on his side, but he will need to draw on both if he is to defy the odds and overhaul the youthful exuberance of Martyn who has come out on top at the last three rounds to cement his championship lead. The Italian has dropped down from the premier TrialGP class this season and he started the year in fine form with three wins from the first four days of competition before the wheels came off his wagon at TrialGP Portugal. In stark contrast, Martyn got off to a much slower start, but has steadily built as his confidence levels have soared.

"We've had a bit of a rest after TrialGP Great Britain, but we've been working hard," said Martyn. "I'm feeling good and just want to get the job done. I struggled a lot with nerves last year, but I've found a way to crack it this season and I'm going to treat it like a normal Trial and just go for the win. Matteo is going to be very, very strong on his home ground, but he'll have the same pressure to perform as I did last time out at my home round and we'll both be pushing hard."