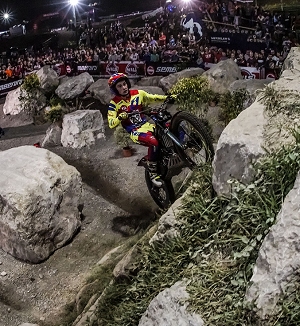 Top spot in Trial2 qualifying gives Toby Martyn best start position as he attempts to seal the Trial2 Championship at final roundReigning and newly-crowned twelve-time Trial king Toni Bou - Repsol Honda lit up the second qualification session at TrialGP Italy - the eighth and final round of the 2018 FIM Trial World Championship - at the Metzler Offroad Park at Pietramurata Di Dro. Competing under floodlights for the first time ever, which proved to be a huge success thanks to the latest innovative twist by championship promoter Sport7, the Spanish legend - who clinched the 2018 title last time out with victory at TrialGP Great Britain - signalled his intention of signing off on top this season with a commanding night-time performance in the foothills of the Alps.

It was Bou's compatriot Jaime Busto - Gas Gas who set the benchmark in the Q1 session, but a maximum at his second attempt over the huge boulders that comprised the imposing man-made section dropped the teenager down the order to a lowly twelfth. Bou, however, was impeccable to record his fifth Q2 victory of the season with his cocktail of pace and perfection leaving n--one in any doubt as to who is the boss! "I'm very happy because I try to do my best," said Bou. "Jaime is very fast so it's incredible for me and the show is very, very special. I don't have the pressure this weekend so I can enjoy this moment."

Veteran Albert Cabestany - Beta matched his best result of the 2018 campaign to take second, finishing over a second-and-a-half behind Bou but still three-and-a-half seconds ahead of Jeroni Fajardo - Gas Gas in a Spanish one-two-

With a big crowd surrounding the section, France's Benoit Bincaz - Scorpa shocked the audience drinking in the night-time atmosphere by taking fourth ahead of Spanish duo Miquel Gelabert - Sherco and Jorge Casales - Vertigo as former champion Adam Raga - TRRS also recorded a maximum to end the session in thirteenth and third man away tomorrow.

With the Trial2 championship on the line, home hero Matteo Grattarola - Honda, five points down heading into the series finale, succumbed to the pressure and picked up a maximum to finish twentieth as his title rival Toby Martyn - Montesa recorded a perfect ride to top the Q2 session. The rising British star finished over half-a-second clear of Norwegian Hakon Pedersen - Gas Gas with Spain's Gabriel Marcelli - Montesa taking third. The result sees veteran Grattarola start fourth tomorrow and hands him a significant disadvantage as the Trial2 crown goes down to the wire.