2018 TrialGP Season Draws To a Close 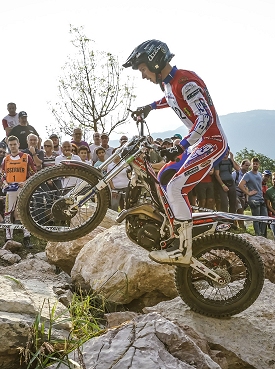 Billy Green is officially a World Champion with the 125 Class being lifted from World Cup to World Championship statusThe spectacular venue of the Metzler Offroad Park at Pietramurata Di Dro in the foothills of the Alps provided a breath-taking backdrop for TrialGP Italy, the eighth and final round of the 2018 FIM Trial World Championship, where home hero Matteo Grattarola - Honda in Trial2 and Britain's Billy Green - Beta in Trial125 clinched hard-fought World titles. Competing over a compact course comprising sections plotted on largely natural terrain supplemented by big, strategically-placed boulders at the purpose-built facility, the best Trial riders on the planet locked horns for the final individual time this season before next weekend's Trial des Nations team event at Sokolov in the Czech Republic.

With Spanish legend Toni Bou - Repsol Honda already crowned champion for an amazing twelfth consecutive time, focus shifted to the remaining TrialGP podium places along with the climax of the Trial2 and Trial125 classes where both World titles were still up for grabs. Bou, however, was determined to sign off in style and the thirty-one-year-old again stamped his authority on the premier class. Following up an expensive opening lap total of sixteen with a devastating second lap score of just two, he could still afford three additional marks on time as he ran out winner for the seventh time this season on twenty-one, three clear of fellow countryman Adam Raga - TRRS and sixteen ahead of third-placed Jeroni Fajardo - Gas Gas as Spanish riders filled the top-five on the day and in the championship. "I didn't start well today," says Bou, "but my second lap was very good. I think it is incredible to finish the season with this victory."

Trial2 has been electric all season with Grattarola having the early upper hand before Britain's Toby Martyn - Montesa moved ahead with a three-event win-streak and it was only fitting that the title chase went right down to the wire.

Taking full advantage of competing on home turf, thirty-year-old Grattarola turned in his best performance of the season when it really mattered to drop just a single mark on each lap.

His final total of two gave him a sixteen-mark victory over Spain's Gabriel Marcelli - Montesa with eighteen-year-old Martyn a further three behind in third ahead of Italy's Luca Petrella - TRRS and Francesc Moret - Montesa from Spain.

The result locked Grattarola and Martyn together at the top of the points table with the Italian, who dropped down from the TrialGP class this season, taking the title by virtue of more second-placed finishes."I am very happy to win," says Grattarola. "It has been so close this season so to take victory today and the title at my home round is very special."

In the Trial125 class Green, who had won four out of the five days of competition held heading into TrialGP Italy, slipped to third on the day, but it was still easily good enough for him to be crowned the first-ever FIM World Champion in the division. The class has been upgraded from World Cup status this season and the sixteen-year-old rose to the occasion and will rightfully receive his gold medal alongside World Champions from all motorcycling disciplines in Andorra at the start of December. "It's amazing," says Green. "Just to think you are the best in the World is crazy. It is a special thing to be invited to the FIM Awards and I am looking forward to it."

Green completed the opening lap with no marks lost, but three maximum scores along with a dab on lap two dropped him behind Spain's Martin Riobo - Gas Gas and Italian Carloalberto Rabino - Beta who tied on thirteen with Riobo winning on a most-cleans tie-break. Diminutive fifteen-year-old French rider Hugo Dufrese - Gas Gas, who topped yesterday's floodlit Q2 session, was fourth as Riobo consolidated his second position in the championship ahead of compatriot Pablo Suarez - Gas Gas who ended the day in fifth.

With all the individual titles now decided the attention now turns to the inter countries competition as the 2018 FIM Trial des Nations taking place in Sokolov in the Czech Republic next weekend.