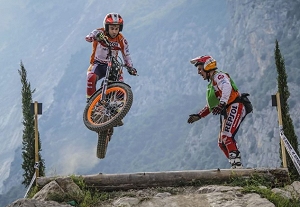 With seven out of a possible nine wins for Toni Bou, the TrialGP World Championship has come to an end. The Repsol Honda Team rider wrapped up the campaign with a further triumph in the Italian TrialGP at the OffRoad Park in Pietramurata. Team-mate Takahisa Fujinami confirmed a sixth place final position in the championship table.

In spite of not fully commanding the earlier stages of the final event of the TrialGP season, Toni Bou nevertheless finished the day in his usual spot atop the podium. The Repsol Honda Team champion managed to make amends for too many points picked up in the earlier sections to finish the first lap just one point behind the leader. A spectacular lap two put paid to the competition with the champion accruing a mere two points. With the title already bagged at the previous event in England two weeks previously, Bou further endorsed his position in the championship, beating the nearest second place by a thirty-eight point margin after winning seven of the season’s nine TrialGPs.

Takahisa Fujinami battled to improve on his position in the general standings, but the difficulties of the OffRoad Park sections made for a tough task. Fujigas finished sixth on the day and finishes in the same position in the final championship standings.

Both riders will compete next week in the Czech Republic at the Trial de Nations with their respective countries.